‘It’s wonderful being old,’ says Pope at care home for the elderly 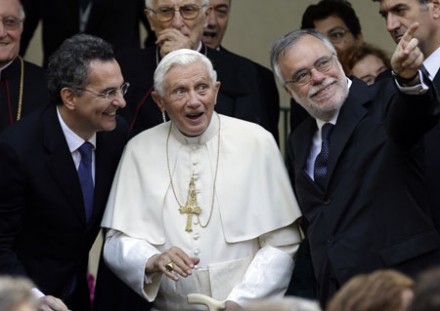 Pope Benedict and, right, Andrea Riccardi, an Italian government minister, pictured during the visit.
Presenting himself as “an elderly man visiting his peers”, Pope Benedict XVI visited a Rome residence for the elderly today, urging the residents to see their age as a sign of God’s blessing and urging society to value their presence and wisdom.
“Though I know the difficulties that come with being our age, I want to say, it’s wonderful being old,” the 85-year-old Pope said during a morning visit to the residence run by the lay Community of Sant’Egidio.
The residence includes apartments for independent living as well as rooms for those requiring more skilled care. Younger members of the Sant’Egidio Community give their time assisting with and visiting the residents, who include an elderly couple from Haiti whose home was destroyed in the 2010 earthquake.
Walking with his white-handled black cane, the Pope visited several of the residents in their rooms and apartments before addressing them and members of Sant’Egidio in the garden.
One of the residents, 91-year-old Enrichetta Vitali, told the Pope: “I don’t eat so much anymore, but prayer is my nourishment.” She asked the Pope to “pray that I don’t lose my memory so I can keep remembering people in my prayers”.
The Pope told those gathered at the residence on the Janiculum Hill that in the Bible a long life is considered a blessing from God, but often today society, which is “dominated by the logic of efficiency and profit, doesn’t welcome it as such”.
“I think we need a greater commitment, beginning with families and public institutions, to ensure the elderly can stay in their homes” and that they can pass on their wisdom to younger generations.
“The quality of a society or civilisation can be judged by how it treats the elderly,” he said.
Pope Benedict also insisted on recognition of the dignity and value of all human life, even when “it becomes fragile in the years of old age”.
“One who makes room for the elderly, makes room for life,” the pope said. “One who welcomes the elderly, welcomes life.”
The Pope told the residents that he knows the aged face difficulties, especially in countries where the global economic crisis has hit hard. And, he said, the elderly can be tempted to long for the past when they had more energy and were full of plans for the future.
However, the Pope said, “life is wonderful even at our age, despite the aches and pains and some limitations”, he said.
“At our age, we often have the experience of needing other’s help, and this happens to the Pope as well,” he told the residents.
Pope Benedict said they need to see the help they require as a gift of God, “because it is a grace to be supported and accompanied and to feel the affection of others”.