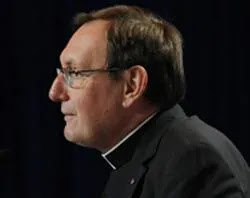 Bishop Jean Laffitte, secretary of the Pontifical Council for the Family

Denver, Colo., Aug 11, 2011 / 05:05 pm (CNA/EWTN News).- Bishop Jean Laffitte warned against focusing too intently on the sexual aspect of Blessed John Paul II's Theology of Human Love, which he says runs the risk of eliminating the depth and “mystery” involved in human and divine love.

In an Aug. 3 interview, Bishop Laffitte weighed in on the current debate on how best to interpret the late pontiff's teachings, saying it is essential to first understand God's design in creating man and woman.

Pope John Paul II's teachings on human love and sexuality – a collection of five years’ worth of his Wednesday audiences from 1979 to 1984 – is widely seen as unprecedented in the history of the Church.

Sexuality and the Body

Bishop Laffitte said that although it's normal to be attracted to “the beauty of sexuality and the beauty of the human body,” he doesn't agree with emphasizing “the sexual phenomenon” without giving the whole perspective of “the mystery of creation, and the mystery of God's calling on human love,” as taught by Pope John Paul II.

Bishop Laffitte recalled that when God created Adam and Eve from nothing, he could have used the same method to create every other person in human history. Yet instead, God enabled man and woman through their sexuality to participate in creating human life themselves.

“The Creator wanted the human being to be His own mediator in the action of creation – that's extraordinary,” he noted. “From that moment, in His providential intention, the man and woman He created would be the mediators through which He would continue to give life.”

“That's the mystery of sexuality,” he said, “the expression of divine and human love, which is integrated and interpenetrated.”

“It's impossible,” then, the bishop added, “to isolate sexuality” from this integration and “to isolate the body from this mystery,” since this would ultimately “isolate the creature from the Creator.”

Bishop Laffitte said that the mystery of sex encompasses “not only the unity of the bodies” but a unity of bodies “which are animated by God and which express a spiritual love.”

“When Pope John Paul II talks about the body we have to understand this,” he said.

The pontifical secretary also said that the term “Theology of the Body” is in fact an English translation of what is originally called “The Catecheses on Human Love.”

Although the English term is “not incorrect,” he said, it doesn't necessarily portray “the entirety of the Catecheses.”

The Theology of the Body “is not a wrong expression, on the condition that we see the intention of John Paul II,” Bishop Laffitte said.

“He was talking about human love and not only the partial focus we could have only on the body and on sexuality – which is ultimately a bodily expression of love.”

“Certainly the body has a theological dimension, but this dimension is given by God's design on human love and what, in the nature of man and woman, belongs to the fulfillment of the design.”

Teaching Sexuality in the Modern World

Although Bishop Laffitte praised the intent behind popularizing John Paul II's teachings on human sexuality, he underscored the “risk” of transmitting a narrowed vision of them. He stressed that in today's world, human love and sexuality have been “disfigured,” and Church teachings on the subject need to be spread as a means of evangelization, accessible to all people.

In response to those who say the philosophical and anthropological topics involved in the late Pope’s teachings are too complex for the average person, Bishop Laffitte said he believes anyone “of good faith can always be sensitive to mystery.”

“Even when a person cannot read and write, when he falls in love with someone he enters into an extraordinary mystery,” the bishop said.

Regardless of a person’s level of intellectual knowledge, he “has the same experience” when he falls in love as even the most educated person.

Bishop Laffitte also cautioned against taking a casual or “vulgar” approach to discussing human sexuality in the context of Church teachings.

“Man and woman have sinned,” he explained, “and in our bodies we bear the consequences of this wound in our nature.”

He said it's ultimately “unrealistic” to think that we can discuss or treat the issue of human sexuality in a casual or indifferent way, or ignoring the reality of sin.

“There is a dignity” and a “respectful expression of love and design” needed, Bishop Laffitte emphasized.